Cara-Friend had an amazing Pride Season 2017, attending all three Pride festivals in Northern Ireland for the first time!

Belfast Pride parade saw a huge contingent of almost 300 young people marching with Cara-Friend LGBT Youth. We were joined by our young people from our flagship group in Belfast, but also from Cookstown, Ballymena, Armagh and Foyle. The LGBT Helpline and other volunteers were also represented in numbers. The atmosphere in Belfast was fantastic. Earlier that morning, representatives from Cara-Friend and Here NI met with An Taoiseach Leo Varadkar, TD at the Belfast Pride Breakfast.

Earlier in the week Cara-Friend hosted an LGBT Youth film evening, with a showing of the film ‘Pride’. We were delighted to welcome existing members and lots of new ones. On Thursday of Belfast Pride we held our LGBT Interfaith Dialogue in the First Presbyterian Church on Rosemary Street. We were joined by LGBT-affirming faithful from all the world’s main religions including Buddhism, Christianity, Islam and Judaism. It was a fantastic event which will allow Cara-Friend to continue working in this area, providing a platform for religious leaders, and people of faith to come together to promote LGBT-affirming messages within faith.

Cara-Friend also had the pleasure of winning a Belfast Pride Award for Innovation in the LGBT Community with our partners, ShoutOut, in recognition of our LGBTQ+ Inclusive Schools Programme, which aims to tackle LGBT bullying in secondary schools across Northern Ireland.

On the Monday of Foyle Pride Week Cara-Friend and The Rainbow Project jointly hosted a coffee morning to kick off the start of the festival in the Foyle LGBT Centre. It provided a great opportunity for members of the community and other service providers to come into the LGBT Centre and to get to know staff members, including the services we offer as organisations serving the community. Included amongst the attendees were the Samaritans, the Education Authority, Derry and Strabane Council, the RAF Cadets, Community Dialogue, PSNI, First Housing, CAMHS and the Western Trust.

Again, we had a fantastic turnout for the parade at Foyle Pride, with almost 100 young people joining us from our Foyle group, as well as Cara-Friend young people travelling from Belfast, Cookstown and Ballymena. Afterwards Cara-Friend a movie and pizza night in the Foyle LGBT Centre to provide an alternative place for young LGBT people to hang out on Pride evening.

And just to round the whole 2017 Pride Season off with a bang Cara-Friend took part in the Pride in Newry Parade! We had a fantastic day, led out by the young people from Cara-Friend LGBT Youth Newry, and joined by those from our youth groups in Belfast and Cookstown.

Thanks to everyone who participated in our events, joined us in the parades and shouted and cheered for Cara-Friend form the sidelines! We have really enjoyed this year’s Pride Season, and we’re looking forward to 2018 already where we hope to run more events than ever before! 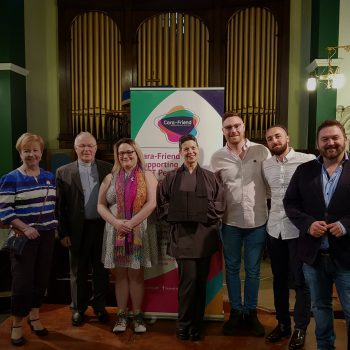 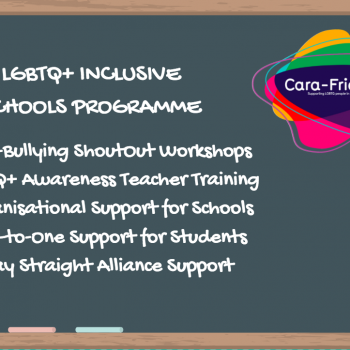