Last week the staff team from Cara-Friend went on a study visit to Malta from September 3rd-6th. The purpose of the trip was to meet with LGBTQ+ people and representatives of LGBTQ+ organisations to learn about the recent, rapid progress made there in terms of legislative change and LGBTQ+ rights. It was also to share learning with community and sector colleagues in Malta around our LGBTQ+ youth service and schools work around LGBTQ+ inclusion. Cara-Friend staff members were joined by the Director of ShoutOut, Bella FitzPatrick. ShoutOut is a partner organisation of Cara-Friend and helps deliver anti-bullying workshops in post-primary schools across Northern Ireland.

The first meeting held was with Clayton Mercieca from Allied Rainbow Communities (ARC). ARC is an organisation which aims to bring the LGBTQ+ community in Malta together, providing services based on need, while also organising the annual Malta Pride Festival. Clayton was able to provide a very helpful overview of the recent progress on LGBTQ+ rights made in Malta.

In 2014 Malta became the first state in Europe to add gender identity protection to its constitution, the legislation being some of the most progressive in the world with regards gender recognition. Also in 2014 Malta passed legislation allowing same-sex couples to adopt children. In 2015 legislation was passed which outlawed sterilisation or invasive surgery on intersex people. In 2016 conversion therapy of LGBTQ+ people was banned, and in 2017 marriage equality was passed.

At another meeting Cara-Friend and ShoutOut met with Joseph Peregin, from Drachma Parents, and Christopher Vella, from Drachma LGBT. Drachma is an umbrella group which brings LGBTQ+ people of faith together, particularly Roman Catholic LGBTQ+ people. They have a very active membership and the group from Northern Ireland and Ireland were particularly struck by the very positive engagement Drachma have had with the Catholic Church hierarchy in Malta.

The whole trip was a great success and left the Cara-Friend team with much to ponder!

This study trip was funded by the Education Authority of Northern Ireland, and is an annual fixture in Cara-Friend’s calendar, with previous study trips having been made to Greece, Italy, Spain and Slovakia. 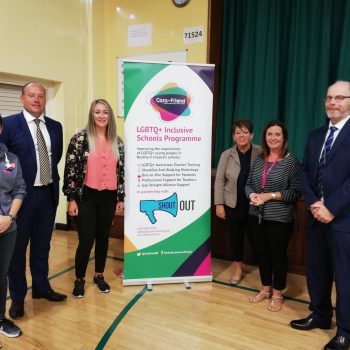